This 528hz Frequency Can Transform Your DNA

Over recent years it is coming to the surface more and more that how we listen to music and how we tune our instruments has a profound effect on our consciousness and that it is significantly different now in modern times than how it has been done since ancient times.

A quick browse at the sacred mathematics and the sacred ritual use of sound in ancient evolved cultures will reveal that sound frequencies were always resonant with sacred geometry and phi ratio mathematics.

This is why the frequency 432h has been such a popular concept for discussion for those interested in consciousness expansion. Tuning instruments is more in resonance with natural harmony and well-being that the frequency that has become more common among modern musicians.

432hz is associated with DNA healing and repair and the heart chakra.

Likewise, 528hz is another very important frequency that resonates an important and often latent aspect of our consciousness.

Take a listen, even as you go about your daily activities, and see how you feel:

According to Dr. Leonard Horowitz, 528 Hertz is a frequency that is central to the “musical mathematical matrix of creation.” More than any sound previously discovered, the “LOVE frequency” resonates at the heart of everything. It connects your heart, your spiritual essence, to the spiraling reality of heaven and earth.

Let the Love 528 music play inside you

The Love frequency is the “Miracle” note of the original Solfeggio musical scale. Independently confirmed by researchers, these core creative frequencies were used by ancient priests and healers in advanced civilizations to manifest miracles and produce blessings.

Math scientist Victor Showell describes 528 as fundamental to the ancient Pi, Phi, and the Golden Mean evident throughout natural design. Vic Showell and John Stuart Reid (a pioneer in acoustic research and cymatic measurements) have proven that 528 is essential to the sacred geometry of circles and spirals consistent with DNA structuring and hydrosonic restructuring.

528 resolves to a 6, the icon for physical manifestation. That is, 5+2+8=15; and 1+5=6 (using Pythagorean math). The symbol “6” reflects the “spiraling down from heaven into the wholeness of earth.” In fact, the Love frequency can be fundamental to broadcasting all matter and energy into reality according to the laws of physics.

Definition of the Love Frequency

528 is known as the ‘Miracle’ tone which brings remarkable and extraordinary changes. Dr. Joseph Puleo analyzed the meaning of the tone using Latin dictionaries and hidden entries from Webster’s Dictionary. The “Mi” tone is characterized as:

1. an extraordinary occurrence that surpasses all known human powers or natural forces and is ascribed to a divine or supernatural cause, esp. to God.

2. a superb or surpassing example of something; wonder, marvel [1125-75]; ME <L Miraculum=Mira(Ri) to wonder at. fr(French): sighting, aiming to hold against the light. (gestorum: gesture; movements to express thought, emotion; any action, communication, etc. intended for effect.)

The 528Hz tone alone is associated with ‘DNA Repair‘

How it cleaned polluted water in the Gulf of Mexico

In 2010, John Hutchinson, an electromagnetic energy expert from Vancouver, B.C., Canada, helped purify poisoned water off the Gulf of Mexico following the BP oil spill. He and his research partner, Nancy Hutchinson (formerly Nancy Lazaryan), used the 528 Hz frequency and other Solfeggio tones to reduce the oil and grease in polluted waters.

The polluted area was treated with the frequencies for four hours the first day, and by the next morning, the waters were cleared. They also did four more hours of RF frequency to complete the test. The frequency device was situated about 25 feet up the beach from the water.They restored the water’s vitality as manifested by the return of fish, dolphins and even barnacles. Nancy said that ‘the water that had been murky brown was a clear green. Two dolphins came into 5 feet of water to visit. Lots of schools of fish and crabs [were] very active’.

Their results were certified by Dr. Robert Naman, President of Analytical Chemical Testing Laboratory, Inc. of Mobile, Alabama. Dr. Naman, an analytical chemist with almost 30 years in the field, tested the samples and confirmed the complete removal of oil and grease from the after treatment sample source tested.

As you can see, the amount of oil and grease “before” the frequency treatment was 7 ppm (parts per million, or milligrams per liter); while the samples that had undergone the frequency exposure measured less than 1 ppm.

John’s method of using sound and radio frequencies nearly eliminates the oil and toxins completely, and has no known dangerous side effects. John and Nancy can clear a radius of about a mile in one 24-hour session.

Analytical Chemical Testing Laboratory, Inc. (ACT) stated, “While the technology is not completely understood by the undersigned, it is clear that the process may have extreme value, and it should be given a chance to be presented and tested on a large scale basis.”

Who uses the 528Hz frequency?

Let’s resonate together in harmony with our planet

Llewelyn S. Lloyd, in the Journal of the Royal Society of Arts (16 Dec., 1949), described his innate drive to “tune-up” to a “brighter,” more soothing and inspiring frequency than A=440Hz. The British author and composer expressed his preference for precisely A=444Hz tuning, that manifests the C-5-pitch at 528 Hz. He wrote that this 4 Hz higher pitch is more generally pleasing for musicians worldwide.

Recent research by veteran piano tuner and custom piano designer Daniel Koehler demonstrated the beneficial acoustic and spiritual impact of prototype pianos that include granite bridges to best accommodate the higher tension of strings tuned to A=444Hz. Koehler reported most enthusiastically that the 528 Hz frequency resonates most powerfully and enduringly.

In 2009, thousands of people gathered together to participate in the Live H2O Concert for the Living Water. People were playing and chanting in 528Hz, praying for all polluted water to be blessed worldwide.

The Concert for the Living Water was produced by Dr Leonard Horowitz and thousands of volunteers worldwide – there were no large commercial sponsors.

A Recipe for the Planet

528Hz is the bioenergy of health and longevity. It is the harmonic vibration that lifts your heart and divine voice in harmony with heaven.

Can you imagine how beautiful the world would be with the Love vibration permeating the air? More and more people are awakening spiritually, mentally and emotionally and choose to be in tune with 528Hz.  This healing frequency helps you flow in perfect rhythm and harmony.

Nearly our entire global economy is built upon a foundation of illness, sickness, and death. The powerful Sound of Love can end the problems on Earth today. I encourage you to use the 528 Hz frequency to restore human consciousness to its full power and potential.

528 Hz Frequency And Your DNA

Your DNA is not set in stone. It can be transformed.

According to Dr Leonard Horowitz, the 528 Hz frequency has the ability to heal damaged DNA. At the time I am writing this, there is not enough scientific research available on the subject. What we know for sure is that Dr. Horowitz learned the theory that 528 Hz frequency repairs damaged DNA from Lee Lorenzen, who was using the 528 Hertz frequency to create clustered water.

Clustered water is broken down in small stable rings or clusters. Our DNA have membranes that allow water to flow through and clear impurities. Because clustered water is smaller than bound water, it flows more easily through cell membranes and is more efficient in removing those impurities. The larger, bound water does not flow easily through cell membranes, and therefore the impurities remain and can eventually result in illness.

Richard J Saykally from UC Berkeley has explained that the structure of the water molecule gives it special properties and is essential for DNA’s function. Adequately hydrated DNA hold far greater energy potentials than dehydrated strands. Prof. Saykally and other genetics from the University of California, Berkeley have proven that a slight reduction of energized water bathing genetic matrices causes DNA to fail energetically.

Lee Lorenzen and other investigators discovered that six-sided, crystal-shaped, hexagonal clustered water molecules form the supportive matrix of healthy DNA. He suggests that the depletion of this matrix is a fundamental process that negatively affects virtually every physiological function. Biochemist Steve Chemiski says the 6-sided clear clusters that support the DNA double helix vibrate at a specific resonant frequency – 528 cycles per second.

Of course, all these revelations do not mean that 528 Hz will repair your DNA in a direct way. However, if the 528 Hertz can positively affect water clusters, then it can help to remove impurities allowing your body to become and remain healthy and balanced.

How music and 528 Hz can affect DNA

Sound and vibrations can activate your DNA

In 1998 Dr. Glen Rein of the Quantum Biology Research Lab in New York performed experiments with in vitro DNA. Four styles of music, including Sanskrit and Gregorian chants that utilize the 528 Hz frequency, were converted to scalar audio waves and played via a CD player to test tubes containing in vitro DNA. The effects of the music were determined by measuring the DNA test tube samples’ absorption of UV light after an hour of exposure to the music.

Glen Rein’s experiment indicate that music can resonate with human DNA. Rock and classical music do not affect DNA, although spiritual musical chants do resonate with DNA. Although these experiments were performed with isolated and purified DNA, it is likely that the frequencies associated with these forms of music will also resonate with DNA in the body.

Another study entitled, “Effect of sound wave on the synthesis of nucleic acid and protein in chrysanthemum” ends with the conclusion: “This result indicated that some stress-induced genes might be switched on under sound stimulation and the level of transcription increased.”

If genes can be switched on or off due to “sound simulations” it is within reason to think that DNA can be effected by sound, and if by sound, then also by the frequency of that sound.

The potential of sound positively effecting our lives is obvious, and the potential for a 528 Hz (and other frequencies) affecting DNA may have some scientific validity. However, there needs to be more research to make the DNA repair claim. 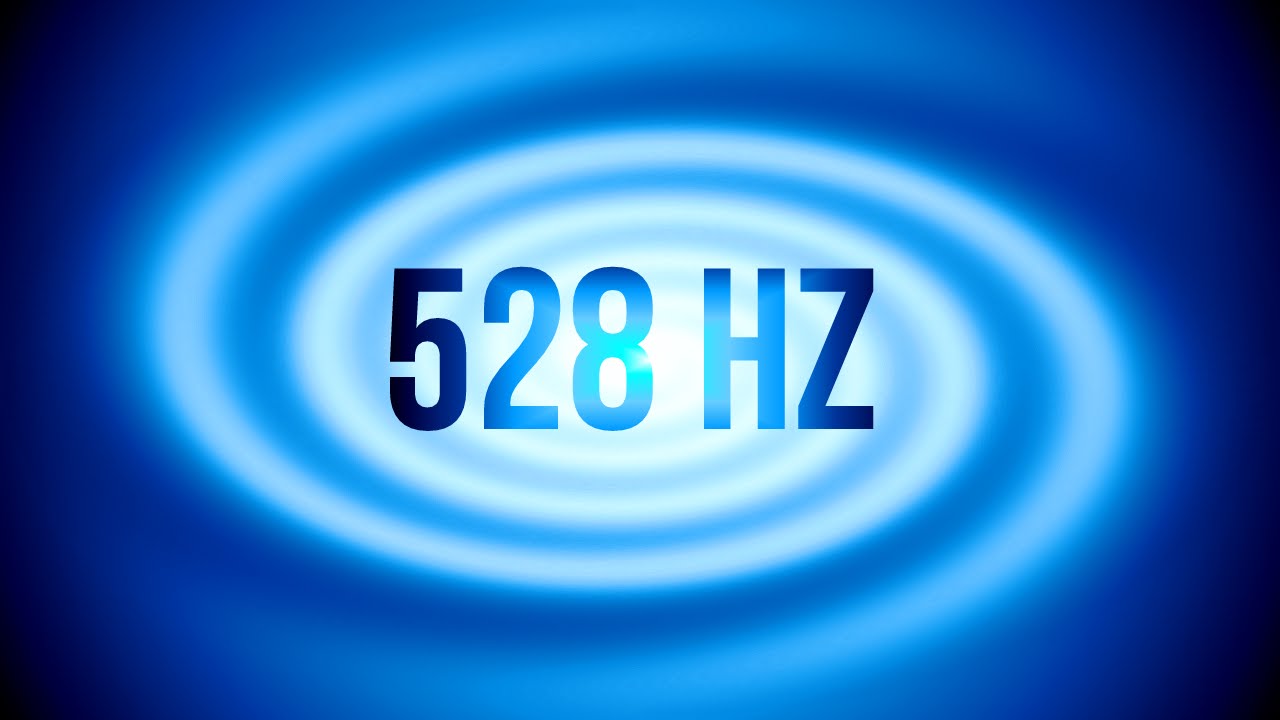 The Love frequency is the “Miracle” note of the original Solfeggio musical scale. Independently confirmed by researchers, these core creative frequencies were used by ancient priests and healers in advanced civilizations to manifest miracles and produce blessings.

Math scientist Victor Showell describes 528 as fundamental to the ancient Pi, Phi, and the Golden Mean evident throughout natural design. Vic Showell and John Stuart Reid (a pioneer in acoustic research and cymatic measurements) have proven that 528 is essential to the sacred geometry of circles and spirals consistent with DNA structuring and hydrosonic restructuring.

528 resolves to a 6, the icon for physical manifestation. That is, 5+2+8=15; and 1+5=6 (using Pythagorean math). The symbol “6” reflects the “spiraling down from heaven into the wholeness of earth.” In fact, the Love frequency can be fundamental to broadcasting all matter and energy into reality according to the laws of physics.